As of 4:55 am CDT 10-12 ft of water was in homes in Plaquemines Parish, WRNO radio has reported at 3:15 am CDT that a levee had been breached in a south parish in 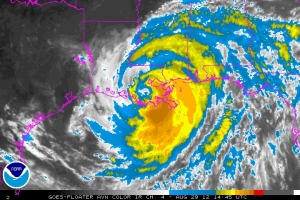 10:00 AM CDT, Wed Aug 29 Isaac was located at 29.6°N 90.7°W. The system is moving slowly Northwest at 6 mph, Min pressure was 972 millibars and Max sustained winds have decreased from 80mph to 75 mph. The flood threat from torrential rains and storm surge will continue through tonight along the North Gulf Coast.

New Orleans as Isaac takes direct aim on southeast Louisiana. Plaquemines Parish has had a levee breach at 3:33 am CDT . The breach was confirmed by Homeland Security at 3:51 am CDT. A breach means the levee is being over-topped.

Isaac is turning out to be a more a significant storm than originally expected as the region observes the 7-year anniversary of Hurricane Katrina.

Power companies were reporting more than 500,000 without power across the southeastern Louisiana and southern Mississippi.

Mayor Landrieu says 70% of New Orleans was without power as of early Wednesday.

The National Weather Service has reported severe wind gusts of 60 to 70 mph since late Tuesday across the area with numerous trees and power lines down. Some isolated locations have reported wind gusts over 100 mph.

Plaquemines Parish President Billy Nungesser said part of the roof of his home on the parish’s west bank had blown off. He described wind-driven rain entering his home as “like standing in a light socket with a fire hose turned on.”

Officials said an 18-mile stretch of levees on the east side of Plaquemines Parish was over topped by storm surge.

Meanwhile, on the Mississippi coast, dozens of roads were closed or impassable due to storm surge flooding and heavy rainfall. Trees and power lines were also reported down across roads.

Highway 90 from Gulfport to Biloxi was reported to be experiencing significant flooding, with up to two feet of water reaching the doors of the Hard Rock Casino early Wednesday.

Fire officials reported they were unable to get to a home that burned to the ground amid storm surge flooding in the Bay St. Louis area Tuesday evening.

Isaac came ashore Tuesday night near the mouth of the Mississippi River, then went nearly stationary back out over the coastal waters for several hours before making a second landfall in Grand Isle.

Hurricane Isaac Strengthening As it closes in on Louisiana 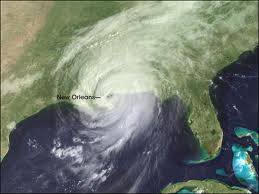 and the surrounding communities of this low lying marshland hurricane vulnerable state. After a series of catastrophic levee failures on August, 30th 2005, a day after Katrina passed it led to mass pandemonium and 1,836 dead.

Later this evening Hurricane Isaac will test the resolve of the U.S. Army Corp of Engineers to see if the levees they worked on can stand up against the impending 6-12 foot storm surge forecasted by the National Hurricane Center.

A storm surge, is dome of water that is pushed onto the land where onshore flow 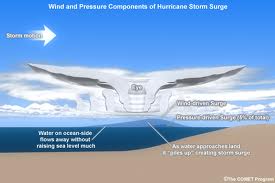 pushes the sea inland near the land falling tropical low pressure center. This aspect of Hurricanes is one of the most mortally threatening to humans and wildlife.

Winds have been increasing in Southeast Louisiana as Isaac approaches, up to 60 mph has been recorded by buoys close to the shore. Winds off Lake Pontchartrain have varied around 35 mph from the northwest this afternoon. So far New Orleans (KMSY) is seeing wind gusts up to 40 mph, with light rain.

Before Isaac was a threat to the northern Gulf Coast, it passed through the leeward islands just days ago as a tropical storm, from there it passed just south of Puerto Rico, then the Dominican Republic and eventually turned more northwesterly going over the western peninsula of Hati. Thereafter it hugged the 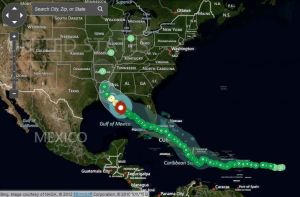 northeastern coast of Cuba missing the mountainous terrain. Moving away from land the center of still Tropical Storm Isaac moved west northwesterly through the Straits of Florida to the south of Key West and into the Gulf of Mexico.

Though the storm never reached hurricane status until earlier today, rainfalls along its path were impressive and its affects were felt far away from the center. Issac dumped 10-20 inches of precipitation along and to the north of its path through the Caribbean, the Straits of Florida and into the Gulf of Mexico toward the North Gulf Coast.

Now continuing to strengthen at 6pm CDT, just hours away from landfall Isaac is looking more impressive on satellite. Winds are sustained at 80mph making Isaac a category one on the Saffir-Simpson Scale. Hurricane force winds extend outward up to 60 miles and tropical storm force winds of 39-73mph reach 185 miles from the center. Air force Reserve Hurricane Reconnaissance Hunters 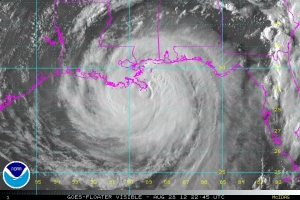 Isaac just hours before its arrival on the southeast coast of Louisiana, in the Northern Gulf Coast this evening. Notice in the visible satellite how an eye is becoming more apparent. This is indicative of further intensification. Image Courtesy of National Oceanic and Atmospheric Association.

measured a recent central pressure of 970 millibars, or 28.64 inches of mercury. Storm surge flooding is already occurring in southeast Louisiana.

Hurricane Season lasts form June1st through November 30th, with the climatological peak on September 9th. Forecasters increased their prediction for the total number of named storms upward to 15-19 storms. If they are right we are only about half way done. 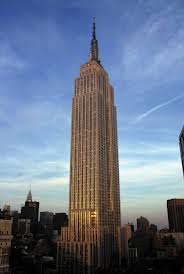 This comes on the heels of the Sikh temple shooting in  Milwaukee, Wisconsin on August 5th and the Dark Knight Rises shooting in Aurora, Colorado on July 21st.

With the frequency of these shootings amidst the U.N. Gun Ban Treaty, one can only wonder the ramifications if any for the 2nd Amendment. At the very least this may give an impetus towards stricter gun control laws for the U.S. .

Information coming from New York City Law Enforcement officials on the scene say there are no terrorist links to this shooting.

According to the National Hurricane Center Tropical Depression Nine formed earlier today in the Atlantic, it is currently about 700 miles east of the 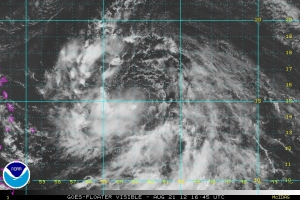 The large and newly formed Tropical Depression Nine Spells immediate concern for the Caribbean and soon thereafter the Southeast United States by as early as Sunday evening. Models forecast the Depression to become Tropical Storm Isaac later today and a Hurricane in 48 hours.

Leeward Islands. Environmental conditions are favorable for intensification and the depression is forecast to become a hurricane by Thursday. Tropical storm warnings are in now effect for the Lesser Antilles and watches have been posted for Puerto Rico and the U.S. Virgin Islands.

NOAA forecasters earlier this month increased the number of storms forecast and say they expect a total of 12 to 17 tropical storms, with as many as five to eight hurricanes, for the 2012 Atlantic Hurricane Season from June 1 to Nov. 30. Two to three of storms could become major hurricanes. It was only back in May when forecasters had initially only predicted nine to 15 tropical storms, with as many as four to eight hurricanes

So far this year there have been five tropical storms and three hurricanes with the most recent being Hurricane Gordon that just days ago passed through the Southern Azores. Since then it has become extra tropical as its remnants move ENE though Portugal.

T.D. Nines Projected Path Shows that core of the storm will move westward through the Lesser Antilles while staying just South of Puerto Rico. As it continues to traverse west along the south coast of the Dominican Republic and Hati it will begin to feel the tug northward by the Deepening Trough across the Eastern United States. In response to that strengthening trough the High Pressure Ridge over Florida and Bahamas will weaken turning then Hurricane Isaac Northwest through Central Cuba.

this storm may change that.

South Florida residents and visitors in particular need to remain vigilant on updates According to The National Weather Service forecast Office in Miami, Florida. Weather Models are continuing to indicate it is becoming more likely that South Florida may be directly impacted late this weekend into early next week by this developing tropical cyclone.