Last Thursday under the order of one of three Congressional Subpoena’s filed against former MF Global CEO Jon Corzine he came to sit before the U.S. House Agriculture Committee in Washington D.C. for questioning on the whereabouts of the over 1 billion dollars in vanished funds. 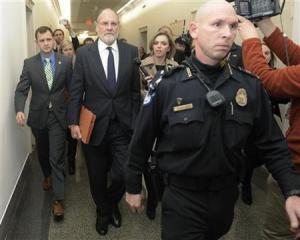 Corzine is trailed by reporters after testifying about the MF Global bankruptcy during a hearing before the U.S. House Agriculture Committee on Capitol Hill in Washington

A primary goal of the this first round of inquisitions were to reveal where the misplaced customers segregated accounts went. The amount missing is purported to be anywhere from 1.2 billion to almost 3 billion dollars in holdings which disappeared from the investment banking firm that was MF Global.

Rep. David Scott, D-Ga., said “it was the height of disbelief to think that Corzine a former senator, a former governor and the former head of Goldman Sachs knew nothing about the $1.2 billion.”

“We’ve got to get better answers from you because you were the CEO,” he said.

Rep. Tim Johnson, R-Ill., said that “people who live in the real world have “suffered dramatically from MF Global’s downfall” and he asked Corzine “whether he’d be willing to pay back those people with his own personal fortune.” Jon Corzine evasively steered away from the question saying, ” The funds will eventually be found.”

Jon Corzine said “he couldn’t account for the missing 1.2 billion in individual accounts.” “There are… many transactions that occurred in those last chaotic days,” Corzine said. “I am not aware of all those, nor do I have all the information to be able to look at all those transactions. As a consequence, it would be very hard for me to speculate as to where or why that shortfall in customer accounts took place.”

Lawmakers continually hounded Corzine as to whether or not he authorized the use of customer funds for proprietary investments. Corzine said again and again, “I had no intention of moving customer money to proprietary accounts.” “There is no intention, under any context that I can think of, that I was authorizing tapping into segregated funds,” he said.

James Kobak, a lawyer representing the trustee for the liquidation of MF Global said “The MF Global records are a mess.”

Commodities Futures Trading Commission commissioner Jill Sommers added, “I think that we can’t over-emphasize the size of the books and records of MF Global…The amount of accounts and transactions are enormous.”