A volcano erupted Thursday in Guatemala, prompting officials to evacuate 35,000 residents, said  a spokeswoman for the Red Cross. The “Volcan de Fuego,” or Fire Volcano, began spewing ash at 10 a.m. and 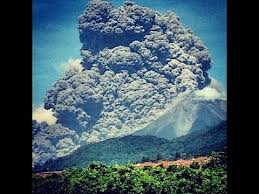 Guatemala has evacuated thousands of people after the Fuego volcano started spewing ash and lava.

was continuing to belch forth late in the afternoon near the country’s former capital, Antigua, said Carmen Maria Caballero of the Guatemalan Red Cross.

Volcanologists said powerful eruptions were catapulting burning rocks as high as 1,000m (3,280ft) above the crater and lava was flowing down its slopes.

Local residents reported how the roaring of the volcano shook windows and roofs in nearby villages. Experts say the eruption of Fuego, 50km (31 miles) south-west of Guatemala City, is the biggest since 1999.

Fuego exploded into a series of powerful eruptions outside one of Guatemala’s most famous tourist attractions on Thursday, hurling thick clouds of ash nearly two miles (three kilometers) high, spewing rivers of lava down its flanks.

Guatemala’s head of emergency evacuations, Sergio Cabanas, said the evacuees were ordered to leave some 17 villages around the Volcan del Fuego, which sits about six miles southwest (16 kilometers) from the colonial city of Antigua, home to 45,000 people. The ash was blowing south-southeast and authorities said the tourist center of the country was not currently in danger, although they expected the eruption to last for at least 12 more hours.

Hundreds of cars, trucks and buses, completely blanketed with charcoal grey cash, sped away from the volcano along the a two-lane paved highway toward Guatemala City. Dozens of people crammed into the backs of trucks. Thick clouds of ash reduced visibility to less than 10 feet in the area of sugarcane fields surrounding the volcano. The elderly, women and children filled old school buses and ambulances that carried them from the area.

The agency said lava rolled nearly 2,000 feet (600 meters) down slopes billowing with ash around the Volcan del Fuego, a 12,346-foot-high (3,763-meter-high) volcano whose name translates as “Volcano of Fire.”

“A paroxysm of an eruption is taking place, a great volcanic eruption, with strong explosions and columns of ash,” said Gustavo Chicna, a volcanologist with the National Institute of Seismology, Vulcanology, Meteorology and Hydrology. He said cinders spewing from the volcano were settling a half-inch thick in some places and that extremely hot gases were also rolling down the sides of the volcano, which was almost entirely wreathed in ash and smoke. The emergency agency warned that flights through the area could be affected.