As of Sunday 10 am central daylight time tropical storm Debby had sustained winds of 60mph, with higher gusts. The latest estimated minimum central pressure taken by Hurricane Reconnaissance flying near the center was 994mb or 29.35inches.  Tropical storm force winds extend 200 miles mainly to the north and east of the center.The most 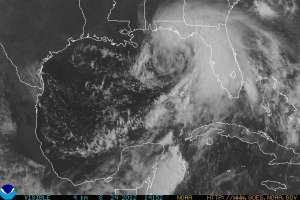 notable thing about Debby is when it was classified yesterday Saturday June 23, 2012 at 5pm it marked the first time in recorded weather history since 1851, that the 4th storm of any Atlantic Hurricane Season formed before July 1st. Sea surface temperatures in the eastern Gulf of Mexico are 1 degree above normal already for this time of year. A tropical storm warning has been issued for part of the southeast Louisiana coast and from the Mississippi-Alabama border eastward to the Florida Panhandle‘s Ochlockonee River. A tropical storm warning states that there will be tropical storm conditions (winds of 39-73mph) in 24 hours or less.  A tropical storm watch is in place for South of the Suwannee River to Anclote Key Florida. That means tropical storm conditions are possible in the watch area within the next 24-36 hours. A storm surge of 3-5ft may occur on the West Central Florida to the Alabama Gulf Coast especially at the times of high tide.

As of 10am CDT Sunday, the storm was crawling along toward the northeast at 6mph. Debby’s center was located about 140 miles SSW of Apalachicola Florida, or 190 miles ESE of the Mouth of the Mississippi River. The slow movement of the storm will lead to copious rainfall

Debby may eventually impact Louisiana by Wednesday According to the National Hurricane Center Forecast Track as of 10 am CDT Sunday June 24,2012. Though a group of other weather models take Debby to the east, or northeast instead toward Apalachicola to Tampa, Florida. This is in response to a digging trough north of the storm diving southeast toward the north east Atlantic seaboard.

accumulations of 3-5inches across South Florida with 10-15inches along the Northern Gulf Coast. The Florida Peninsula has already received 3-5inches of rain in the last 24 hours. There will also be a chance of isolated short lived tornadoes over the southern peninsula of Florida. Authorities there say  at least one tornado has already been linked to the storm down in Collier County. Several homes were damaged and tree limbs were torn down.

Debby is already interfering with oil and gas production in the Gulf of Mexico. The storm system has caused nine production platforms and one drilling rig to be evacuated. This means roughly 2 percent of U.S. production has been suspended.

Unless the storm strengthens and forces more production platforms to close the reduced production is not anticipated to impact oil prices.