What the Frack is Going On

With the noticeable and precipitous increases in seismic activity globally one can only wonder if fracking may have had a hand in some of these geologic events. Hydraulic fracturing or fracking is a means of natural gas extraction employed in deep natural gas well drilling. Once a well is drilled, millions of gallons of water, sand and proprietary chemicals are injected, under high pressure, into a well. The pressure fractures the shale and props open fissures that enable natural gas to flow more freely out of the well. This invasive Energy extraction drilling procedure delves as deep as three miles beneath the surface of the earth for the sole goal of what may be deemed as irresponsible energy sequestration practices.

Dr. Mike Blanpied of the U.S. Geological Survey, who serves as the associate coordinator of the U.S.G.S. Earthquake Hazards program said this in regards to fracking  and its possible relation to the seismic event that occurred last summer in Virginia with a 5.8M earthquake that occurred on August 23, 2011. 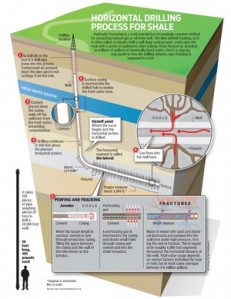 The Ohio Department of Natural Resources, which overseas the oil and gas industry, said in a report that the state should pass a new law prohibiting drilling at what is called the Precambrian basement rock level (a depth that begins at 9,184 ft) and would require companies to “review existing geologic data” before drilling.

The agency also said it wants the state to require “continuous pressure monitoring systems with automatic shut-off” that monitor the pressure levels of injected waste fluids that would be controlled remotely by the state.

The report found “geological evidence” suggesting that high pressure fluid from a well near an underground fault caused a series of earthquakes in the Youngstown, Ohio area over the last year.

For each fracking operation 80-300 tons of chemicals may be used. Presently, the natural gas industry does not have to disclose the chemicals used, but scientists have identified volatile organic compounds (VOCs) such as benzene, toluene, ethylbenzene and xylene.

These volatile chemicals can eventually leach into the ground water table contaminating it through the many new fissures from hydrolic fracking.

According to the Centers for Disease Control the harmful human effects from benzene are that “it works by causing cells not to work correctly. For example, it can cause bone marrow not to produce enough red blood cells, which can lead to anemia. Also, it can damage the immune system by changing blood levels of antibodies and causing the loss of white blood cells.The seriousness of poisoning caused by benzene depends on the amount, route, and length of time of exposure, as well as the age and preexisting medical condition of the exposed person.”

In a United States Environmental Protection Agency Assessment of the risks on the human body from Toluene they state,

“The central nervous system (CNS) is the primary target organ for toluene toxicity in both humans and animals for acute (short-term) and chronic (long-term) exposures. CNS dysfunction and narcosis have been frequently observed in humans acutely exposed to toluene by inhalation; symptoms include fatigue, sleepiness, headaches, and nausea.  CNS depression has been reported to occur in chronic abusers exposed to high levels of toluene.  Chronic inhalation exposure of humans to toluene also causes irritation of the upper respiratory tract and eyes, sore throat, dizziness, and headache.  Human studies have reported developmental effects, such as CNS dysfunction, attention deficits, and minor craniofacial and limb anomalies, in the children of pregnant women exposed to toluene or mixed solvents by inhalation. Reproductive effects, including an association between exposure to toluene and an increased incidence of spontaneous abortions, have also been noted.”

Some experts  suggest a link between the slew of earthquakes in Italy and fracking now with a death toll up to 17 from the May 20th 6.0 magnitude  6km SSW of Felonica, May 29th’s 5.8mag. 3km SSE of Medolla then 5.4mag. 3km  NW of town of Carvezzo.

Sunday night June 3rd at 9:20pm Italy saw another quake of a magnitude 4.8 in Northern Italy only adding to the uneasiness felt by the citizens across Italy.Whether it is fracking that is responsible for the uptick in seismicity, natural geophysical cyclical internal processes at work here or a combination of the two the data available is compelling.